In addition to carrying passengers, steam ships often carried freight, such as grain, fruit, molasses, oil and even livestock. 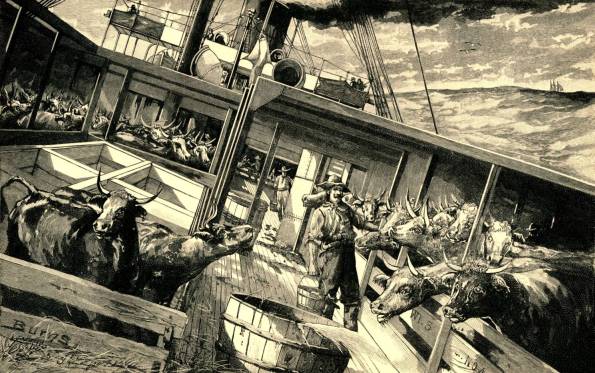 "A few men are regularly engaged in the business of taking care of cattle at sea.  They are known as "cowboys of the sea" and are big burly fellows who are used to rough living and to facing danger... sometimes the pens are broken down in a gale, and there is pandemonium aboard."

- from  Ocean Steamships by F.E. Chadwich

Era Before Steam Propulsion at Sea

"Since time began, the elements had ruled the earth.  New mechanical and physical devices and forces were being put to work which were presently to give man the advantage.  Engine and propeller were about to replace mast and sail."

-from Greyhounds of the Sea by Carl Cutler 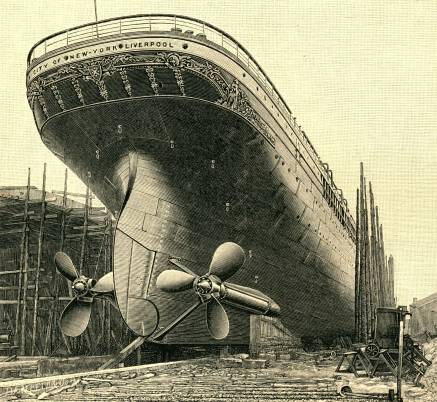 In 1888, from the Inman Line, the City of New York entered service as the first express passenger liner to employ twin screws.  A leap ahead in efficiency, reliability and safety, the use of two propellers rendered sails as a fallback unneccessary in future ship designs.  Image from Ocean Steamships by F.E. Chadwich et al., 1891.

"Mining is not, as is generally thought, the most dangerous industry in the world: it's fisheries, followed very closely by the shipping industry."

-from Mayday: the Perils of the Waves by Nicholas Faith

A Period of Transition

"Three products of nineteenth-century engineering and industrial development had to be brought together before a steamship could compete freely on many world routes with contemporary sailing vessels.  First, iron in large dimensions and at reasonable prices had to be readily available.  Then the screw propeller had to be developed to a relatively high level of efficiency.  Finally, the compound engine with its greater efficiency and smaller fuel consumption had to be appied to the driving of the propeller and this, of course, meant higher pressures than were possible with the boilers of the first half of the nineteenth century."

-from Steam & Sail by P.W. Brock and Basil Greenhill 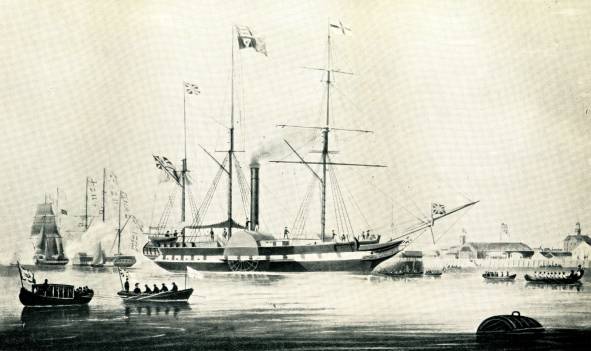 Still made of wood in 1842, the Trident may be the first steamship to carry a reigning sovereign, Queen Victoria, as she returned from Scotland.  All accompanying vessels were quickly outpaced, except for the Monarch, another early steamer from the General Steam Navigation Company.  Image from Steam-Ships by R. A. Fletcher, 1910.

"The steamboat of our inland waterways was not the offspring of the steamship.  It was created by former flatboat and keelboat men who, being acquainted with the nature of rivers... placed boilers and the engine on the deck. This was one of the major differences between the steamboat and the steamship, which carried its machinery in the hold."

-from The Steamboaters by Harry Sinclair Drago 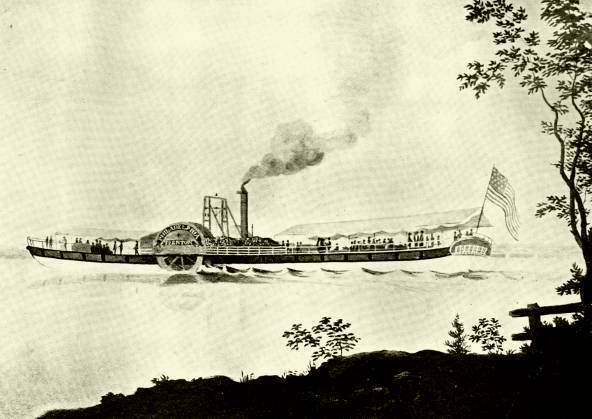 Built by inventor Robert Livingston Stevens, the Philadelphia was the first steamboat to attain an average speed of eight miles. Image from Steam-Ships by R. A. Fletcher, 1910. 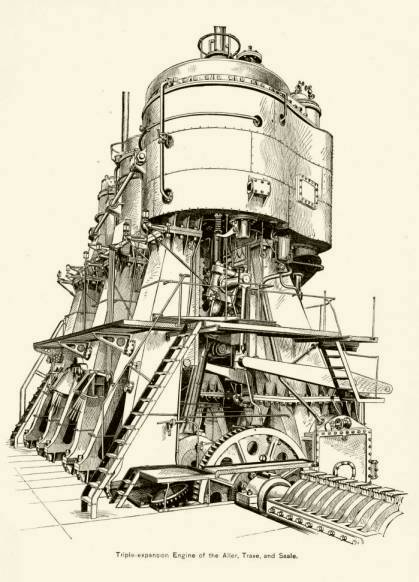 An economical innovation, the triple-expansion engine moved steam through a series of cylinders operating at different pressures.  Image from Ocean Steamships by F.E. Chadwich et al., 1891.

"Navies in the 19th century, though then, as at all times, periodically starved of resources, were at times nevertheless able to innovate and initiate and bear development costs, so that the merchant shipping industry subsequently benefited.  Though navies, for good reasons, were slow to adopt iron construction, the demand from the Navy in Britain for steel in shipbuilding quantities and qualities and sizes resulted in the product's availability at prices which made economically possible its rapid adoption for the construction of merchant ships. Similarly, naval construction pioneered the way for the adoption by passenger liners of propulsion by more than two screws."

- from Steam, Steel and Torpedoes by David Lyon

Steam Takes to the Atlantic

Model of a steamer designed to cross the Atlantic in five days.  Image from Ocean Steamships by F.E. Chadwich, 1891.

Recording, Preserving and Disseminating the History of Engine Powered Vessels

Founded in 1935, SSHSA publishes the quarterly journal PowerShips and maintains more than 100 collections of archived materials focused exclusively on engine-powered vessels, their passengers and crew, both past and present.

View a concise chronology of the development of marine steam engines.

A History of Steamboats

Review the development of the steamboat, the types by function and the risks of navigating U.S. riverways.  Developed by the United States Army Corps of Engineers.