Examples of 19th Century Journals in the Collection

This is a small sampling of the many early journals on engineering and related topics help by the Library.  Be sure to check our catalog for additional holdings

Sample Books from the Collections

Some historians distinguish under this rubric a second phase of the industrial revolution lasting from the 1850’s to the beginning of the First World War.

This period is characterized by an acceleration of the pace of technological innovation and the rate of energy utilization. These factors made possible the production and distribution of electrical energy, the production of petroleum-fueled engines, the mass production of materials resources (e.g., steel, cement), and the assembly-line manufacture of consumer goods.

Major research efforts by historians concentrate on the new type of industries made possible by the generation and distribution of electrical power. 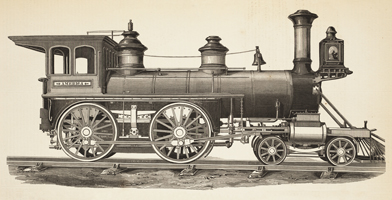 Locomotive America built by the Grant Locomotive Works, of Paterson, N. J., for the 1867 Paris Exposition, a standard American 4-4-0 locomotive of the mid-19th century.