As the most basic type of bridge, a beam bridge bears the load between its supports.  Beam bridges can be as simple as a fallen tree trunk across a stream and as complicated as Quebec City's cantilever bridge, spanning 1,800 feet to become the longest of its kind in the world.

Known for their beauty as well as durability, arch bridges have abutments on each side to restrain the horizontal transfer of compression forces.  Designed with single or multiple arches, these bridges are built from a variety of materials, from wood to masonry and metal to concrete.

Shaped like an inverted arch, suspension bridges use a catenary curve to support the weight of the deck on a variety of materials, ranging from ropes of vine or leather, to chains of iron or cables of high-strength steel.

When unable to build a bridge high enough to provide clearance for the waterway, it can be more practical to construct a bridge that moves.  Three commons designs include the bascule, which pivets upward, the swing bridge, which rotates to the side, and the vertical lift bridge, which goes up and down.

A development of recent times, cable-stayed bridges support the weight load by directly running the cables from the deck to plyons.

Example of a Movable Bridge 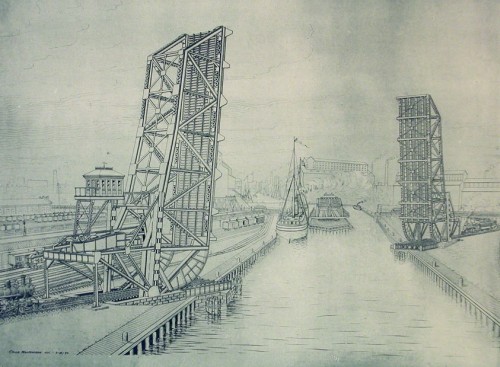 Examples of Cantilever and Suspension Bridges

Four suspension bridges were intially proposed for the location of the Forth Bridge.  Construction had begun on one design, by Sir Thomas Bouch, prior to the collapse of another one of his works, the Tay Bridge (1879).  Here are the preliminary designs for those suspension bridges: 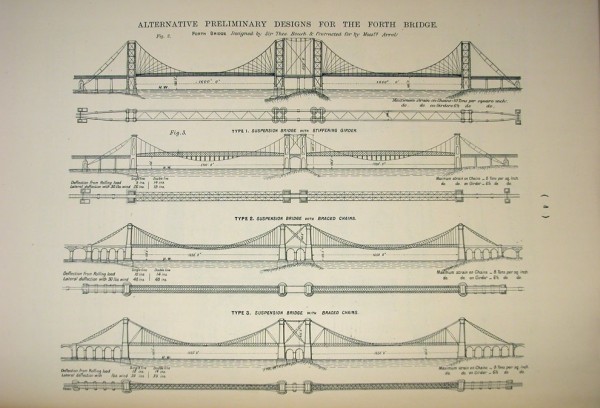 After the disgrace of Sir Thomas Bouch, another bridge was designed, by Sir John Fowler and Sir Benjamin Baker, with stability as top priority.  Still regarded as an engineering marvel, the Forth Bridge is now the second longest single-span cantilever bridge in the world.  Here are the proposed and final designs of this bridge, the first major steel structure to be built in Britain:

Example of a Repeated Arch Bridge 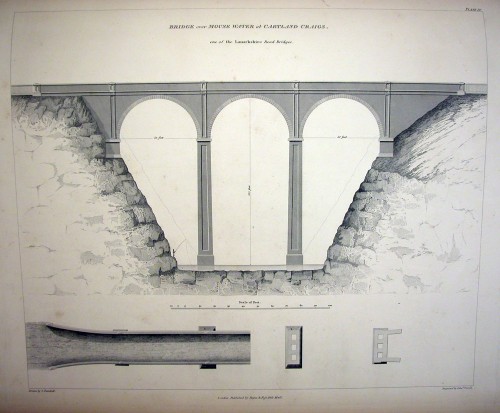