Among the many historical treasures at the Linda Hall Library is a stunning Chinese rug, prominently displayed on the wall of the the History of Science Center Reading Room. The rug was gifted to the Library in 1966 by Helen Foresman Spencer. Along with her husband, industrialist Kenneth A. Spencer, Mrs. Spencer was a benefactor to many museums and libraries in the Kansas City area. Mr. and Mrs. Spencer were generous to the Linda Hall Library over the years with a series of contributions and gifts, including the large malachite tazza in the Library’s main reading room and this silk rug.

Attached to a February 1966 letter Mrs. Spencer wrote to the Library’s Board of Trustees was this unsourced description: “Rare Chi’en Lung (1736-1795 AD) Imperial gold-woven silk dragon carpet. Old gold ground woven all over in subdued shades of blue, red and tan, with scrolling tendrils, the scalloped central medallion and quarter round corner spandrels each with scaly Imperial dragon, with dark blue, details in shades of blues, rose, tan and ivory. At one of the ends, is the inscription CHUNG HO TIEN PEI YUNG (Made for use in CHUNG HO Palace); size 9 feet x 12 feet.”

The metal-wrapped thread woven throughout is indicative of luxury, and the prominent yellow-gold color was reserved for royalty. Yellow silk ground with imperial dragon in the central medallion and in four corners of the central field. The use of the dragon in China was a symbol of imperial power in many Chinese dynasties; it appears five times on the rug. While the origin of the rug is unknown, it clearly belonged to someone of great importance, most likely during the Qing Dynasty (1644-1911) in China.Today, the rug adds brilliance and wonder to the History of Science Center reading room. 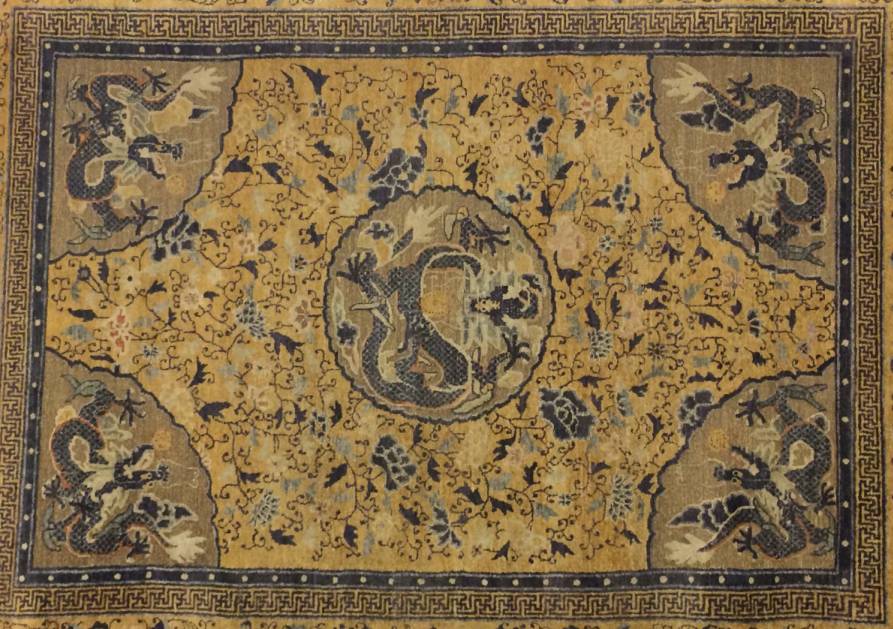 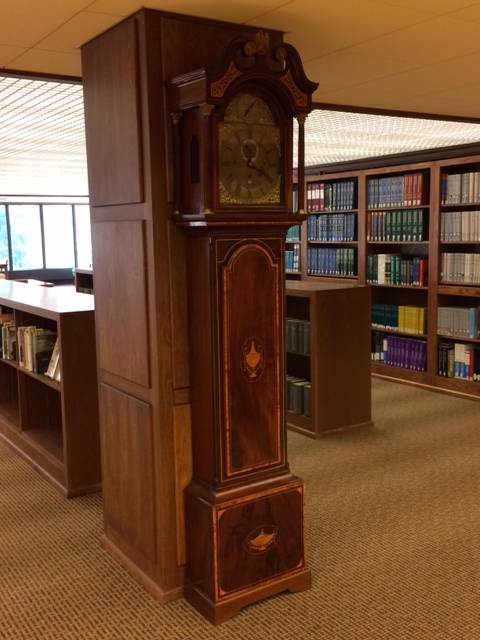 When Linda Hall died in 1938, her will specifically stated that "the James Cowan Grandfathers Clock" in her house remain in the library building that was to replace the house.

Herbert and Linda Hall purchased the clock in 1912 from a dealer in Edinburgh, Scotland, thinking they were buying an 18th century clock by the famous Scottish clockmaker, James Cowan. Although the Cowan name is on the clock's dial, the rest of the movement is constructed in the style of a clock dating from the mid-19th century.

During the clock's 1993 restoration, the name James Kenmuir was found die-stamped on the movement's front plate. Kenmuir was a mid-19th century clockmaker from Lisburn, Ireland, whose name was not visible until the dial plate was removed. Craftsmen have a long history of copying the finer pieces of earlier workers, capitalizing on the styling and quality of known masters. The markings on the dial and movement of Linda Hall's clock point to such a reproduction.

As it accurately chimes the quarter hours in the Main Reading Room, the clock reminds us of its rich history, of the generosity of the anonymous donor who made the clock's repair and restoration possible, and of Linda Hall's lasting legacy. 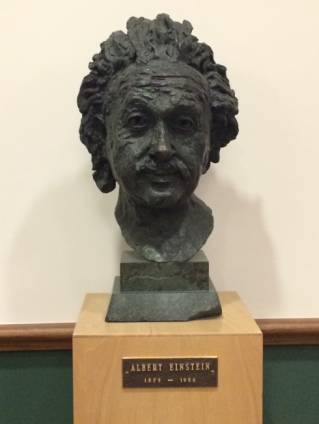 Several bronze busts of eminent scientists who have made outstanding contributions to modern physics can be found at the library. In the Rare Book Room, on display are Albert Einstein by Sir Jacob Epstein, Max Planck by Walther Wolff, and Enrico Fermi by Robert Berks.

On the loggia surrounding the Main Reading Room, reside the busts of Niels Bohr, who discovered the quantum nature of the atom, of Ernest Rutherford, who discovered the atomic nucleus and of Paul Dirac, who predicted the existence of anti-matter. All three busts were sculpted by Kurt Harald Isenstein between the years of 1955-1972. 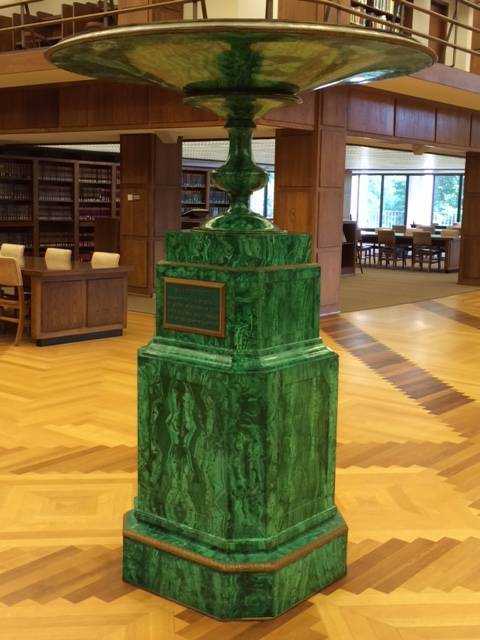 Czar Nicholas II presented the gift of a great malachite tazza to the American Ambassador to Russia, August Heckscher, in 1910. The tazza became part of the Heckscher Museum of Art collection, where it resided for many years. The tazza was rediscovered in the art and antiques marketplace and purchased for the Linda Hall Library by Mrs. Kenneth Spencer.

A “tazza,” is a shallow, stemmed or footed, saucer-like ornamental bowl, usually mounted on a high pedestal or base. The Linda Hall tazza is considered to be one of the four most important pieces of green malachite in the world, according to art historians, and the largest in the U.S. The remarkable piece measures 6 feet, 6 inches from its base to its rim. The saucer measures nearly 5 feet in diameter. Other major pieces are located in the Kremlin, the Hermitage Museum in St. Petersburg, the Vatican, and the Lighner Museum in St Augustine, Florida.

The word “malachite” was derived from “mallow” or “Malvaceae”, a green plant which has palmately lobed leaves; the swirling pattern and green coloring of the stone suggests a palmate leaf pattern. Malachite, a mineral often found in oxidized zones of copper ore deposits, was found abundantly in the Ural Mountains of Russia. Other significant deposits have been found in France, Israel, Mexico, and Arizona. It often occurs with azurite.

The mineral, valued for jewelry and art objects, has been used to stunning effect in the interiors of Czarist palaces and opulent residences. Malachite was used as pigment for green paint found in Egyptian tomb paintings, wall paintings in Ming dynasty China, and 8th Century illuminated manuscripts. The pigment is little affected by strong light. In more recent years, the beautiful patterns of the stone in the Linda Hall Library’s malachite tazza have provided the basis for gift wrap and other paper goods. In the late 1970s or early 1980s Hallmark designers and photographers took images of LHL’s tazza, subsequently creating products that featured a repeating section of the stone in the south side tazza pedestal.

The tazza, with its origins in Russia, offers a tie-in to the Library’s exceptionally strong collections of Russian and other Cyrillic-language materials in science, engineering and technology.

Helen Foresman Spencer, with her husband Kenneth Spencer, was a generous benefactor of the Library. She presented the Library with the remarkable sculpture in 1972 to serve as a focal point of the Library’s Main Reading Room. In the decades since, the tazza has held many towering floral arrangements, in celebration of festive events. Once a symbol of imperial opulence in Russia, the tazza now symbolizes the wealth of knowledge held in the collections of the Linda Hall Library. 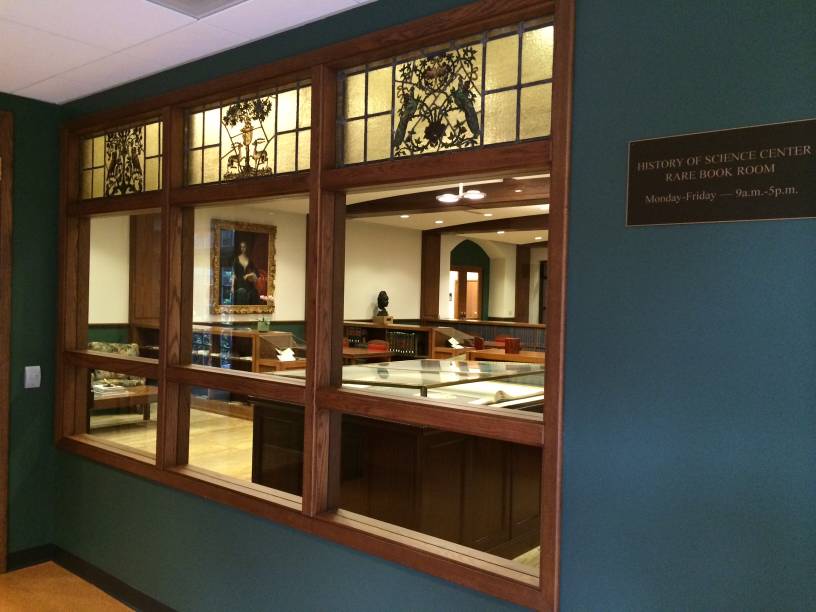 Sunroom windows from the Hall home 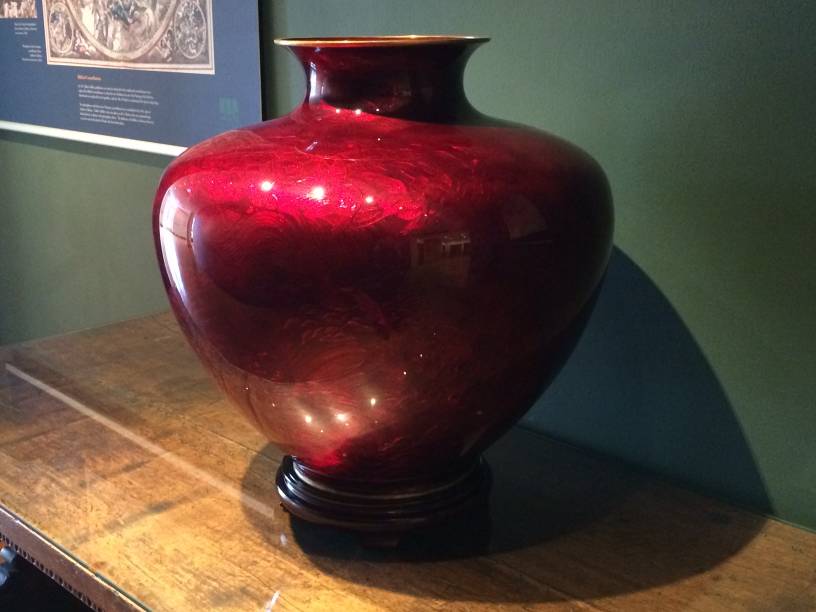