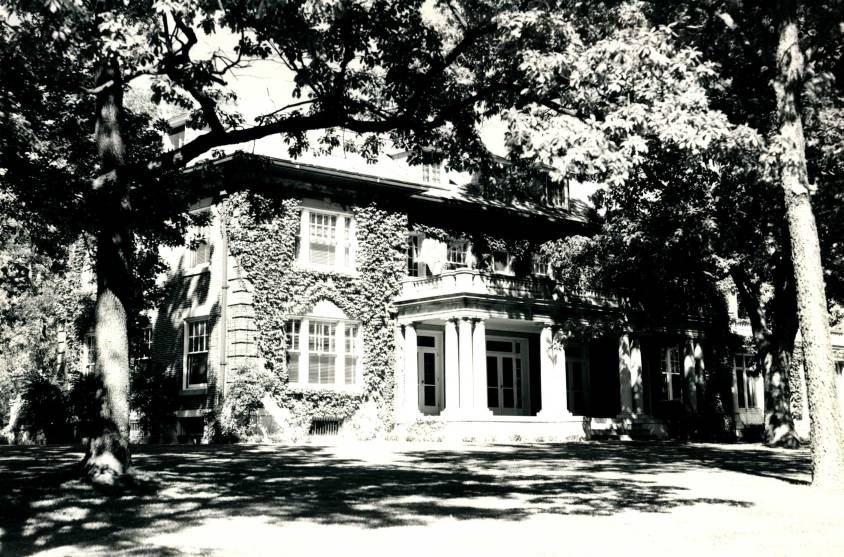 Herbert and Linda Hall lived in a Georgian mansion surrounded by 21 acres of carefully tended grounds in the heart of Kansas City. Their home housed the Library from its 1946 opening until 1956. 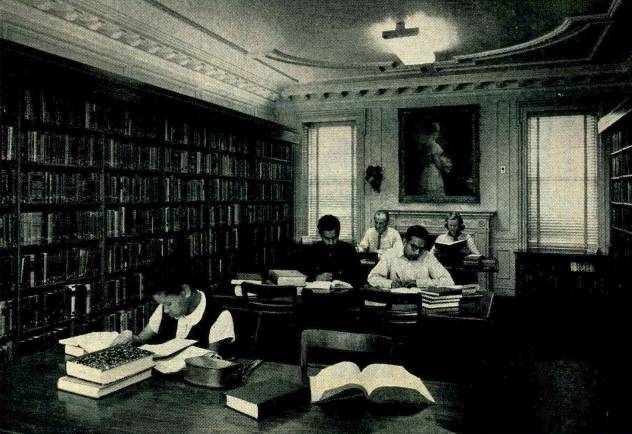 Image of interior of home from Kansas Citian, February 5, 1952. 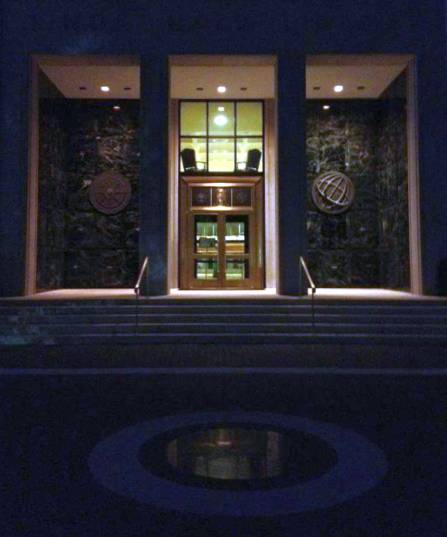 At night, the library entrance illuminates the surrounding arboretum.

The main library building opened March 19, 1956. It was designed by Edward W. Tanner & Associates, prominent architects responsible for many of Kansas City’s commercial designs, particularly for J.C. Nichols on the Country Club Plaza, and for the design of prestigious residences throughout the city. The design featured a clean, linear brick exterior. The interior spaces are accented by warm oak paneling reflective of the Hall’s home, floor-to ceiling windows that connect to the surrounding arboretum, a striking bi-color oak parquet floor, and a serpentine balcony railing that outlines a cruciform public space. The Main Reading Room serves visitors as a lecture hall and gathering place for Library events.

The original Library building included beautiful spaces for the History of Science Collection, the Director’s office, and Board of Trustees functions. These spaces drew features inspired by or drawn from the Halls’ home, including paneling, crown molding, pocket doors, and furnishings. On December 12, 1973 the Helen Foresman Spencer Rare Book Room was dedicated, built with a gift from one of the Library’s most generous donors. The gift funded a beautiful space to display and protect the growing History of Science Collection, as well as associated space for storage and research. 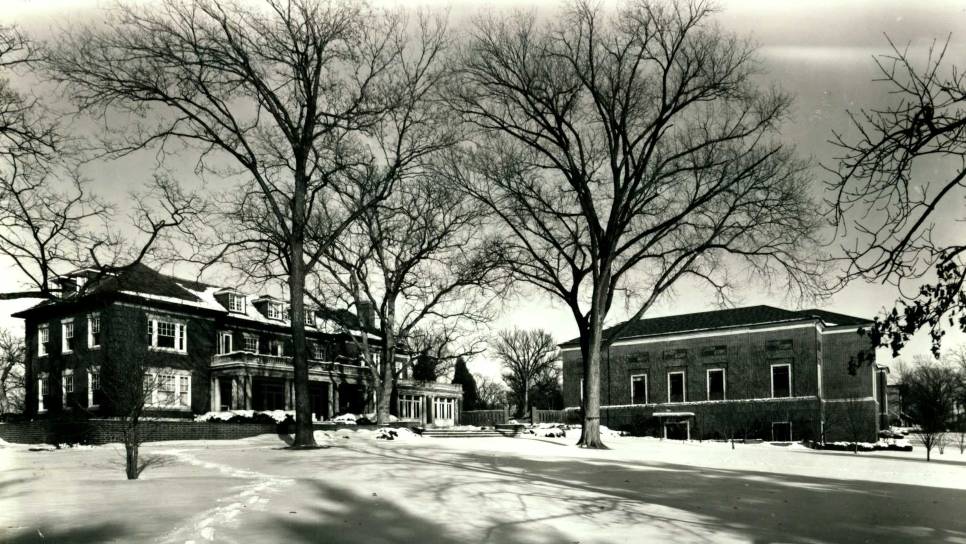 Between 1956-1964, images were captured of both the main library building and the Hall mansion.

In the early 1960s plans were developed to provide an auditorium, an exhibit hall and more stacks space for the growing collection. The new wing was designed by Tanner & Associates and built on the site of the Halls' home, which was necessarily demolished starting January 1964. Many architectural elements from the home were incorporated into the new building, which opened March 1965. 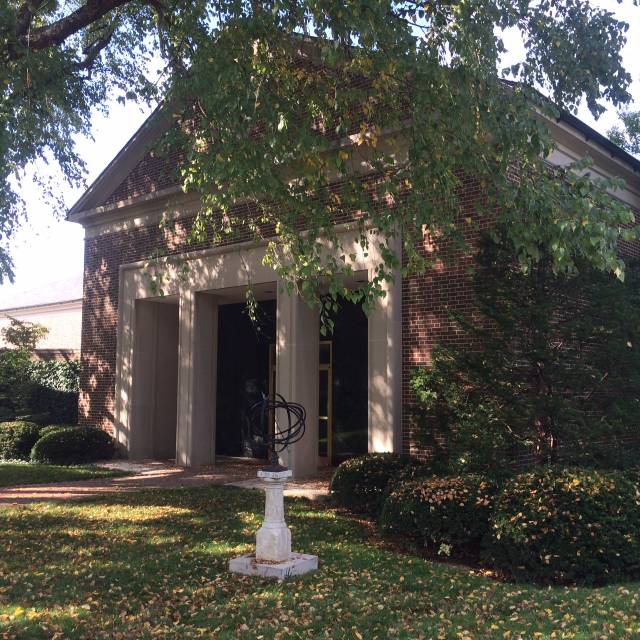 The corridor leading from the Main Reading Room and Exhibit Galleries is graced with images from the Library's collection of star atlases. 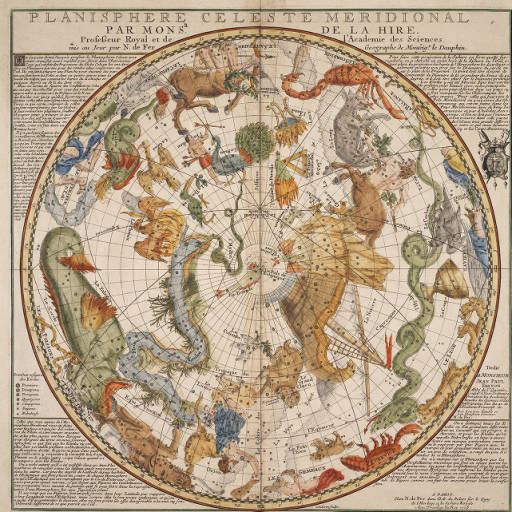 In 1705, Philippe de La Hire, a French astronomer, published a pair of celestial maps depicting the northern and southern constellations. The southern map, displayed here, shows constellations that are not so familiar to residents of the northern hemisphere as Ursa Major and Cassiopeia. Left of center we can see Eridanus, the winding river that runs from Orion to the south celestial pole. Cetus, the Whale, is at far left, and the menacing Hydra, the longest constellation in the heavens, is at right. The cluster of constellations at the center, near the pole, such as the Toucan and the Phoenix, were first seen and named by southern voyagers near the end of the sixteenth century. The constellation of the Centaur is just above right center. Overlapping his hind feet is “Le Cruzero,” the Southern Cross. On his left front hoof (marked by a star symbol) is Alpha Centauri, the closest star system to our Sun. And just to the right of Centaurus lies a grouping of the Cup, the Crow, and the southern part of Virgo. 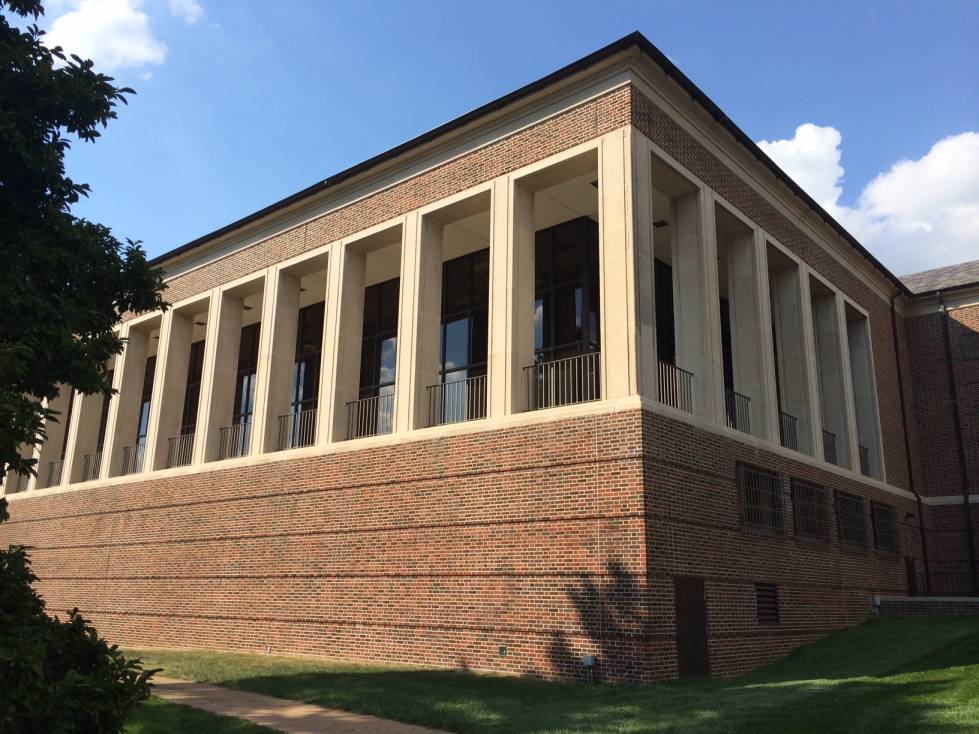 In 1978, the Library was expanded with a 4-floor addition towards the south lawn. The design provided necessary stacks, staff, and public seating spaces, while preserving the integrity of the original 1956 architecture.

In 2006, the Library completed a multi-floor stacks addition designed to provide 50 years growth space in keeping with the Library’s international role as a reliable print archive. The resulting stacks space raises the capacity to 45 miles of shelving. 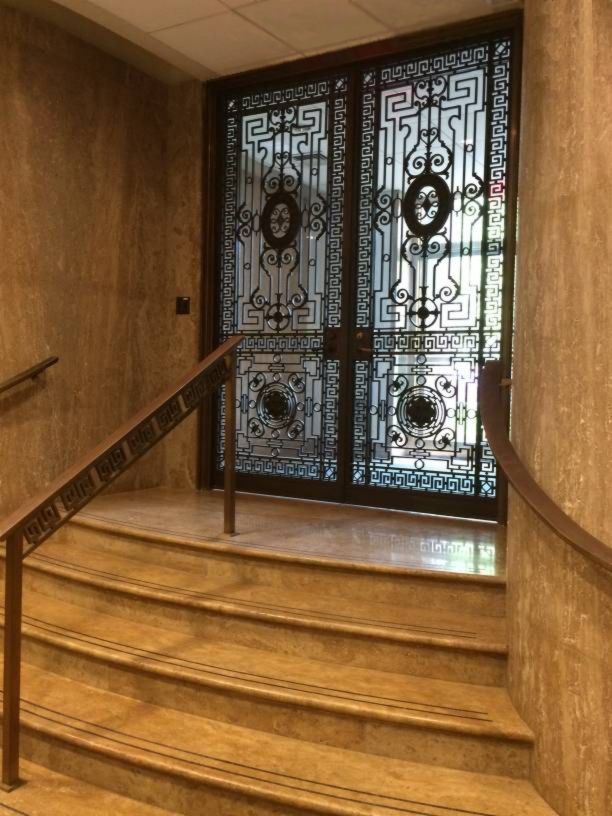 The elegant glass and bronze doors at the entrance to the History of Science Center were received as a bequest to the Linda Hall Library in the will of George H. Davis.  The doors, which had been made for Jacob Loose, were used by Mr. & Mrs. Davis in their apartment at The Walnuts.

At the Linda Hall Library, the doors initially were installed in the main building between the vestibule and foyer of the auditorium, and later moved to grace the west entrance. 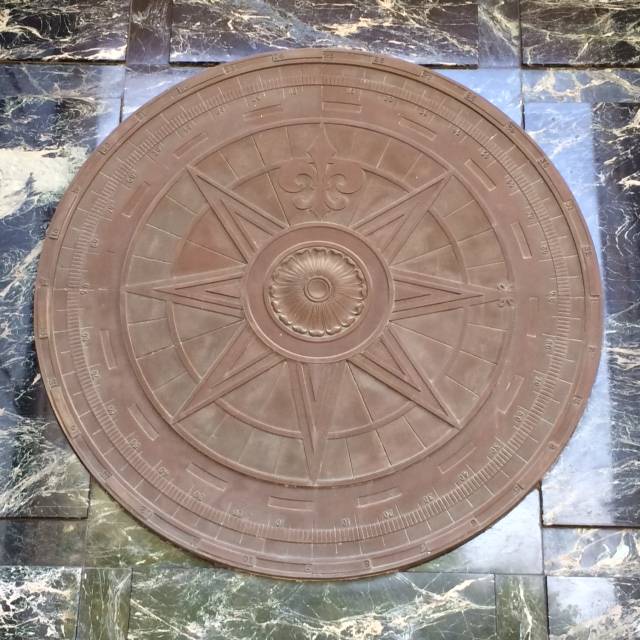 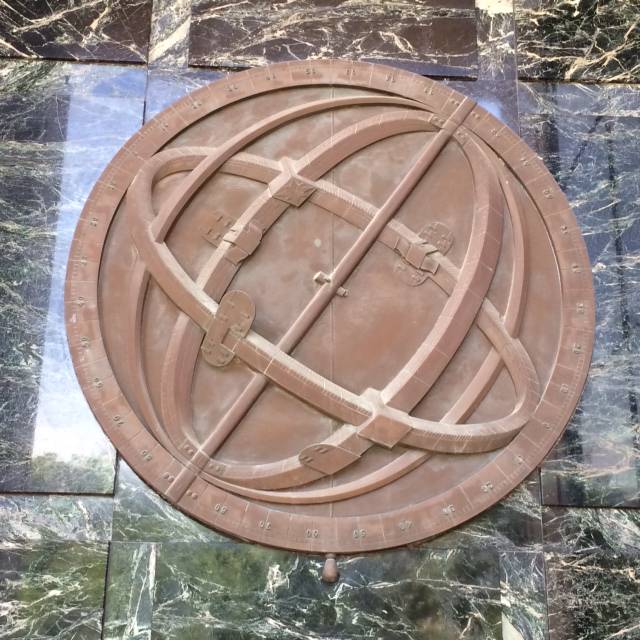 Two images from Joan Blaeu’s Atlas Major have been used to decorate or signify the Linda Hall Library over the decades. Blaeu’s “Grand Atlas”, published in 11 folio volumes, is one of the most sumptuous atlases ever produced. The Linda Hall owns the complete set; each volume is nearly two feet tall, with full vellum bindings decorated with elaborate gold-stamped designs. 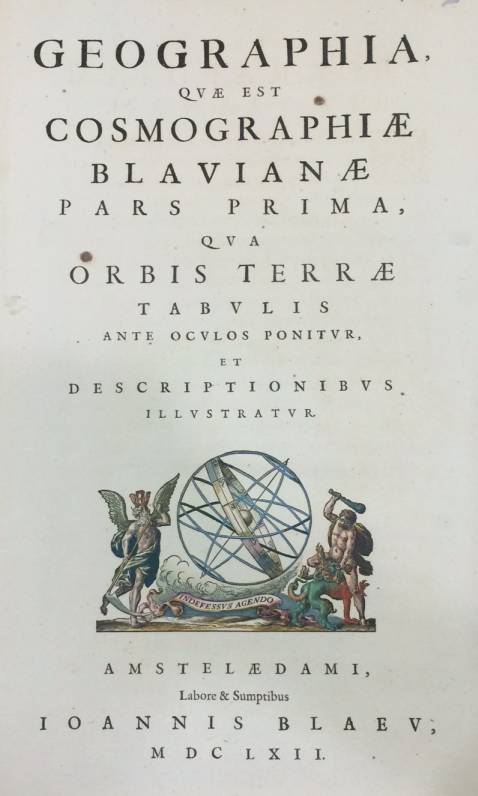 The atlas held the most geographically accurate maps compiled into an atlas at the time. The volumes also contain colored engravings of scientific instruments, many representing items in Tycho Brahe’s observatory on the island of Hveen. Among the images in this magnificent set are a Rosa Ventorum, or “wind rose” and an Equatorial Armillary. 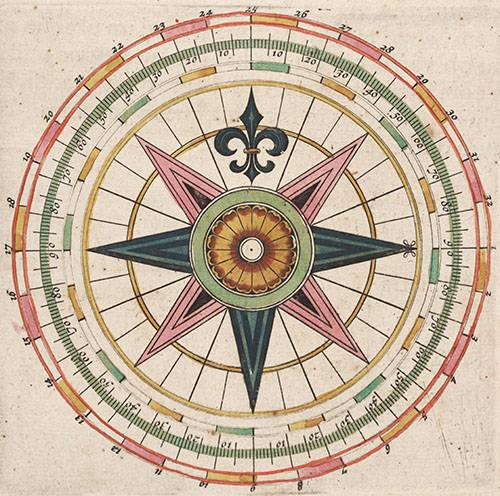 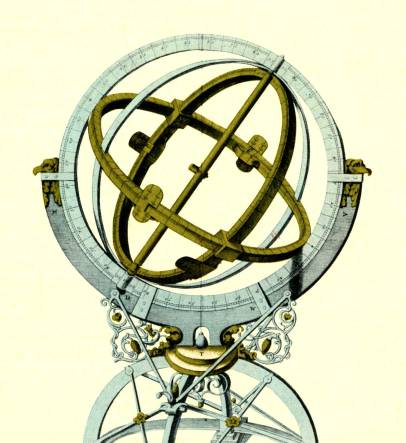 A traditional wind rose marks the directions of the winds. Navigators especially needed a system for indicating directions and the tradition from antiquity was to use eight recurring winds to define north, south, east, west, and the four midway points. The wind rose device was adapted for use on the magnetic compass, but in the 17th century it could still be used to indicate directions by names of the winds. The fleur-de-lis on Blaeu’s wind rose points north and a smaller decorative embellishment marks east. The 16-petal “rose” appears in the middle, while the whole device looks more like a star with points marking each of the cardinal directions. The Atlas Major includes a section on the “Regions of the World, or Winds” giving the expanded list of 32 directions of the winds.

The Library chose the engravings of the wind rose and the armillary for their aesthetic appeal and their relevance to scientific discovery and technological advancements. Bleau’s images were the basis of designs cast as large bronze medallions. The medallions are mounted as plaques on deep-green marble panels in the Library’s main entrance foyer. 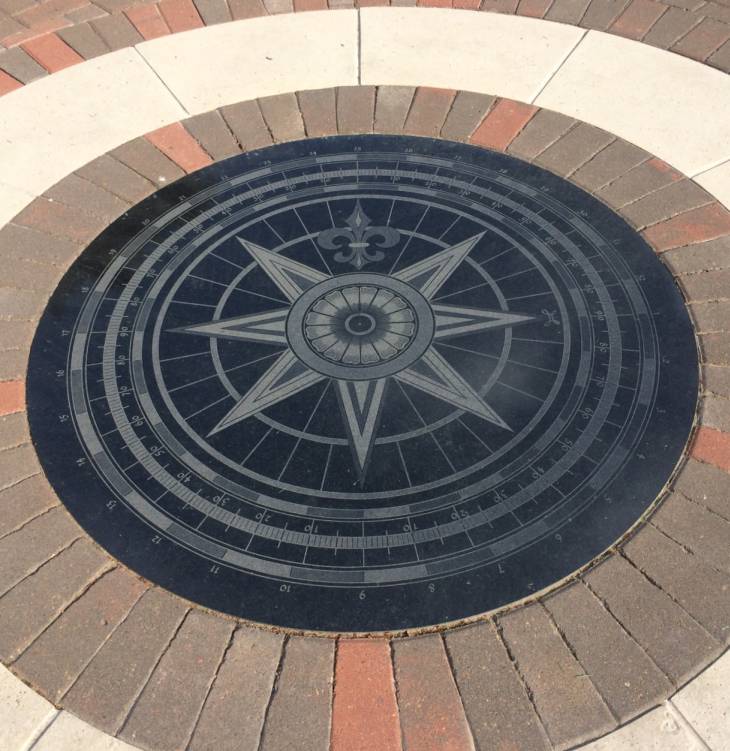 The Rosa Ventorum was recreated in black granite for the Library’s main entrance plaza in 2006, where it serves as a reminder of the international scope of the library’s collections, readers, and visitors, coming from all 32 directions of the winds.

The exterior of the History of Science Center is decorated with 4 bronze panels, measuring 7 feet by 4 feet each. Cast in Italy, the panels are based on title pages, illustrations and decorations from a number of classic books in the history of science, including works by Galileo, Sir Isaac Newton, Luca Pacioli and Sir Francis Bacon. 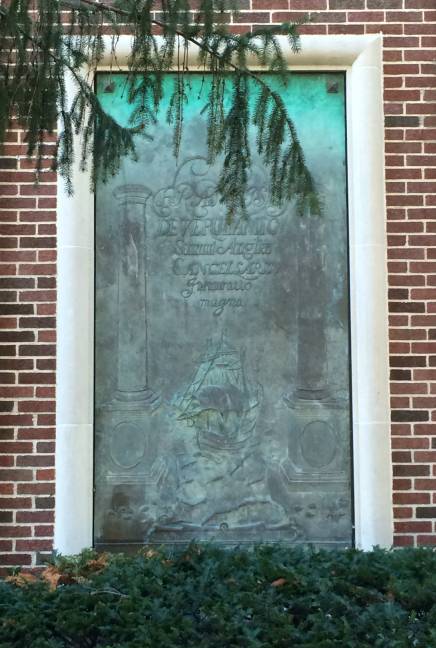 This panel depicts the illustrated title page in Bacon's Novum Organum, with original engraving by Simon van de Passe. As an allegory for man's search for knowledge, the three-masted ship is shown sailing out from the Mediterranean, through the Pillars of Hercules on an Atlantic voyage to the New World. The Latin motto can be translated as "many will pass through and knowledge will be increased." 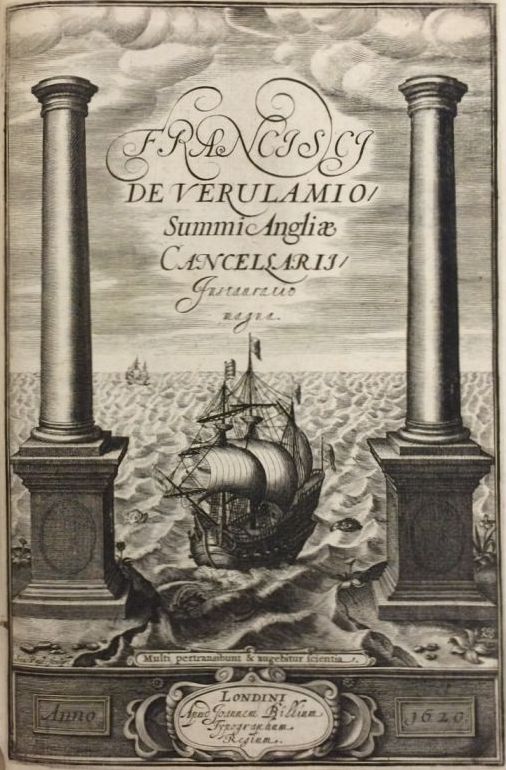 Two more bronze panels flank the stage in the auditorium. One is the title page of Newton's Principia, with a superimposed representation of the first relecting telescope owned by Newton and shown to the Royal Society in 1672. The other bronze panel is a famous plate by Sebastien Le Clerc, engraver to King Louis XIV. It is the earliest pictorial representation of meetings of a learned society, l'Academie Royale des Sciences, Paris, 1676.

Scientist of the Day - Bruno Bearzi