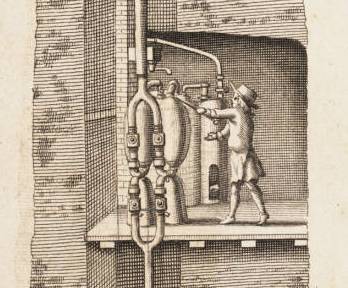 Full plate image, from The Miner's Friend by Thomas Savery, is available in the LHL Digital Collection.

In 1698, to draw water out from flooded mines, Thomas Savery patented a crude machine that incorporated steam pressure. Described as an "engine to raise water by fire," this is often cited as the first practical application of steam to useful purpose. 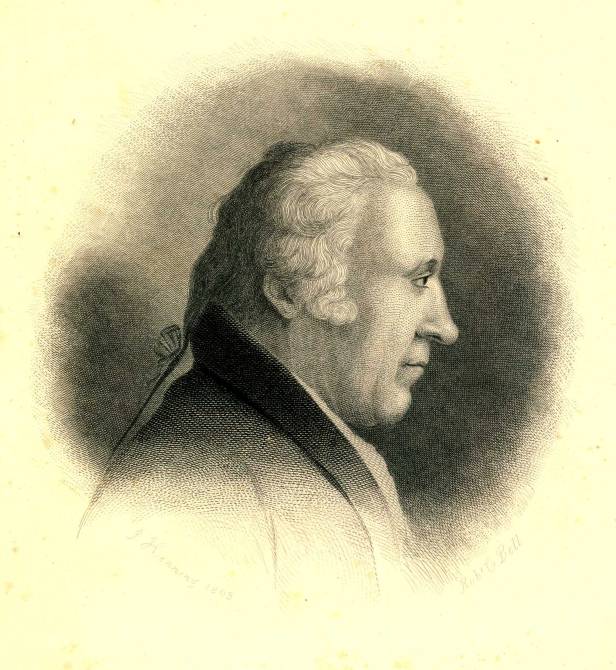 From Memorials of the Lineage, Early Life, Education, and Development of the Genius of James Watt by George Williamson, 1856.

Key figures in the history of the steam engine, James Watt and his partner, Matthew Boulton, can be credited with such developments as the separate condenser, the air-pump, the closed-top cylinder, the use of steam to alternately drive pistons and the discovery of the "expansive working" of steam. However, in retrospect, some claim that their success as businessmen can be attributed as much to political maneuvering and espionage as their determination and imaginative power as engineers. 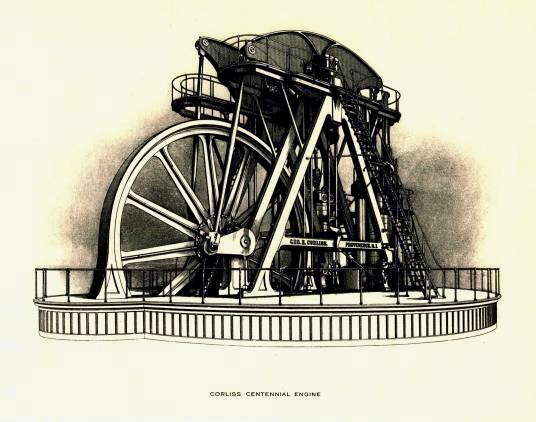 Image from The Life and Work of George H. Corliss by Mary Corliss, 1930.

Displayed at the Centennial Exhibition in Philadelphia (1876), the Corliss Centennial Engine was the largest steam engine in the world, and it even had a march composed in its honor by a captivated attendee, Septimus Winner, the Corliss Engine: Characteristic Grand March (1877). Used to drive all the activity in the Machinery Hall, it had "two forty-inch, ten-foot-stroke cylinders, a steam pressure of eighty pounds per square inch, and 1,400 horse-power."

- adapted from The Power of Steam by Asas Briggs

Explore the life and works of a founder of the engineering profession within the United States, and innovator of the Philadelphia Waterworks and Washington Navy Yard steam engine.

Read about O. V. S. Bulleid, a former Chief Mechanical Engineer of Britain's Southern Railway, who has been called "the last outstanding engineer of the Steam Age."

Contributors to the Age of Steam

This ephemeral collaboration of fire, air, and water, these puffs, wisps and roils of vapor, when confined and intensified by the genius of inventors became a force that drove wheels in revolutions both mechanical and social."

- from Inventors and Discoverers by Elizabeth Newhouse 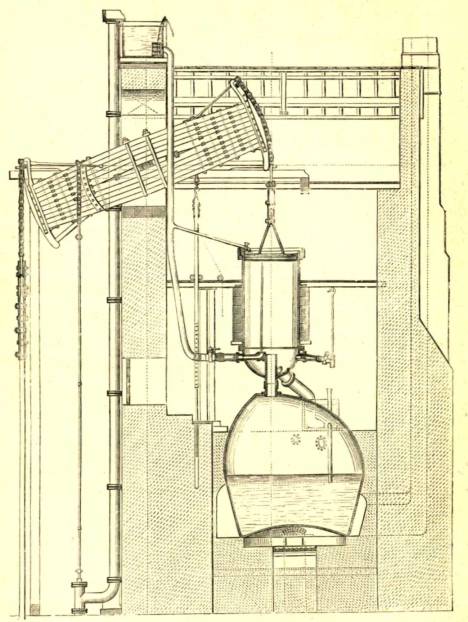 John Smeaton's atmospheric engine at Chacewater, Cornwall, 1775.  Image from The Steam Engine and Its Inventors by R. L. Galloway, 1881.

"Since the amenities of civilised life depend almost entirely on the availability of power for industrial purposes, those pioneers who have provided mankind with the means of obtaining power more cheaply and abundantly will always rank high among the benefactors of humanity. From this point of view no man has made a greater contribution to human welfare than Sir Charles Parsons by the revolutionary improvements he brought about in the use of steam."

- from The Steam Turbine by R. H. Parsons 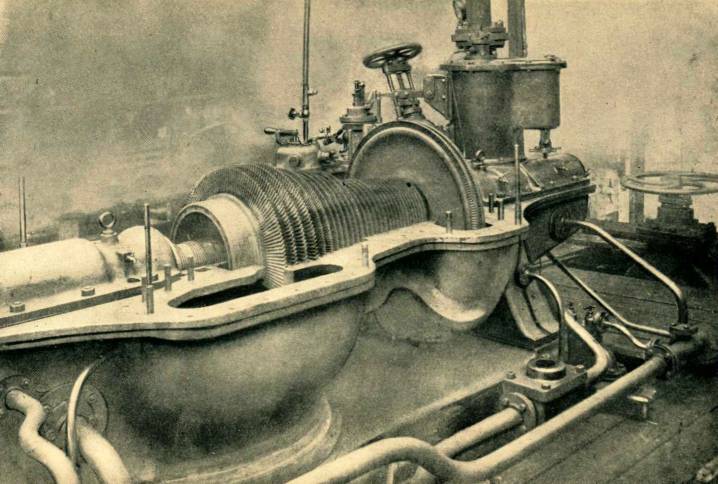 "Fittingly, the steamboat became the emblematic image of the American industrial culture that it was launching, as the steam factory was of Britain's. Not only did it show off the characteristics of what was even then the American stereotype - large, noisy, showy, fast, brash, exciting, powerful, and audacious - and with an impact that made it an icon of American society soon recognizable anywhere in the world."

-from The Fire of His Genius by Kirkpatrick Sale

Although John Fitch was the first to demonstrate the mechanical application of steam power to water craft, with four steamboat designs able to navigate riverways and lakes, he was unable to create a sustainable business model. Thus, Robert Fulton became known as the "Father of Steam Navigation" for his commercial steamboat success, starting with the Clermont in 1807.

Fulton's correspondance is available within the LHL Digital Collections. 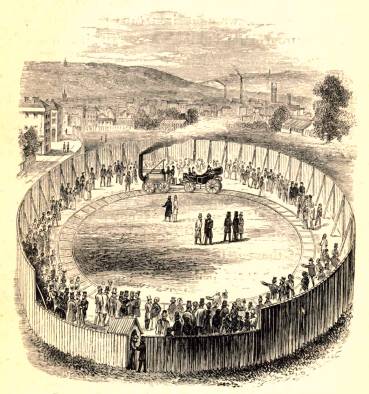 Image from The Steam Engine and Its Inventors by R. L. Galloway, 1881.

In 1808, Richard Trevithick established a steam-circus, with a circular railway to provide rides to the public for a shilling each. The engine, named "Catch-me-who-can," could go at a rate of 12 miles per hour on this track. A few weeks into operation, a rail broke, thus overturning the engine and halting the enterprise.