Introduction to Educator Resources for Biology

Linda Hall Library holds an impressive variety of materials that can be used in the classroom to engage students with biology topics and lessons. We have striking digital collections (including digitized books and online exhibitions) to share with students in class or have them explore on their own, video lectures hosted by the Library with knowledgeable biology experts, and cutting-edge biology books available to borrow. Using primary sources to teach biology can help students relate to the material taught and understand that collective scientific knowledge grows and changes over time. Follow this guide to learn how to use primary sources and expert knowledge from Linda Hall Library to enhance the STEM classroom experience.

The Linda Hall Library’s website hosts over 2,000 digitized books straight from our shelves. Use these online materials to introduce students to primary sources of biological texts and images throughout history. Whether employed as a visual aid in lessons, or explored through individual research time, these materials will help your students better understand the differences and similarities between biology today and in times past. 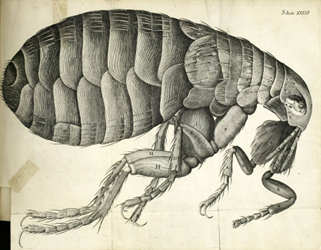 Micrographia : or, Some physiological descriptions of minute bodies made by magnifying glasses. With observations and inquiries thereupon
By Robert Hooke

One of history's most influential books on microscopy, Hooke’s Micrographia delves into the unseen world through descriptions and images from observations he made through his compound microscope. Published in 1665, this work examines both non-living and living matter such as: seeds (scan 231), snail teeth (scan 273), woven fabrics (scan 054), crystals (scan 138), fleas (scan 320), flies (scan 276), lice (scan 324), and plants (scan 191). In describing the box-like structures found in cork (scan 178), Hooke coined the term “cell.” This designation helped lead to the development of the classical cell theory, whereby all living organisms are made of cells.

This digitized book can best be explored by clicking the four-box icon in the upper right corner of the linked webpage. This icon takes you to an overview of all page scans from Micrographia, which is a good place to start clicking into the 38 drawings Hooke included. Classes can compare Hooke’s drawings from his 17th century findings to microscopic findings of their own.

Learn more about Robert Hooke from our “Scientist of the Day” online series. 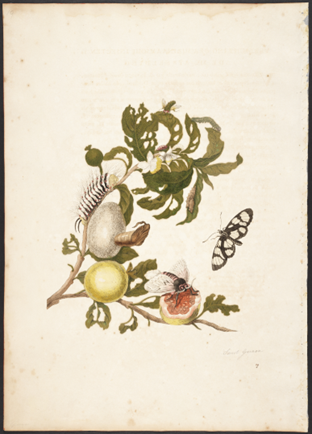 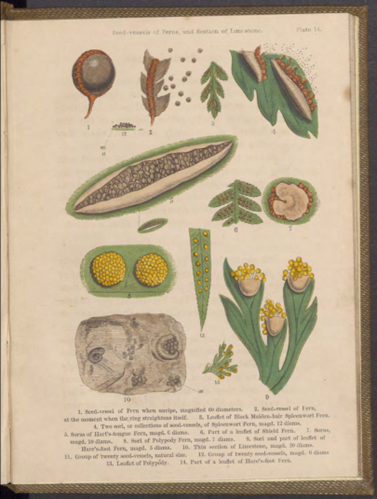 A world of wonders revealed by the microscope : A book for young students
By Mary Ward

More than 200 years after Robert Hooke observed the microscopic world in his book, Micrographia (described above), Mary Ward published findings from her own microscope studies. Mary Ward, Irish microscopist, astronomer, naturalist, and artist found avenues to pursue her passion for science despite the limitations women faced in those pursuits in the 19th century. This book, a reprint of her privately published first book, uses a series of familiar letters to introduce readers to microscopical observations. Thanks to her cousin, the Earl of Rosse, Ward was active in the most important scientific circles of the day, with her illustrations appearing in Philosophical Transactions of the Royal Society. 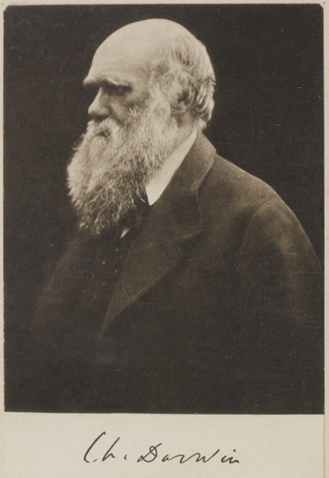 Published in 1859, this book is a cornerstone of evolutionary biology, presenting the scientific theory that populations evolve over generations through natural selection. Darwin wrote this book specifically for non-scientific readers at the time, so its theses and stories are more approachable for the average person (although it will still read as Victorian English).

High school students can read selections from this first edition publication to understand Darwin’s thought process for his hypothesis of natural selection. The introduction gives insight into how his life experiences helped inform his hypothesis, while the following chapters discuss his proof of the theory of natural selection and potential arguments against it. While other works in our digitized collection might feature beautiful calligraphy or paintings, this work highlights witty and revolutionary writing.

Learn more about Charles Darwin from our “Scientist of the Day” online series.

New Biology Books in the Library

In addition to our digitized books, Linda Hall Library also maintains online exhibitions utilizing digitized images from our collections. Students can investigate these exhibits to see highlighted pictures, drawings, and text about the major impacts biological findings have had throughout history.

Linda Hall Library offers a number of lectures to the public on a variety of topics. These lectures have been selected to provide insight into basic biological concepts, or because they help students understand more about the world of biology.

“How do I Become” series

Linda Hall Library hosts the student-focused program, the “How Do I Become” series, which introduces students to scientific professionals and resources for a variety of STEM careers. The following selections would be suitable for middle or high school students and not only introduce students to STEM topics but also help prepare them for careers in STEM-related fields. Highlighted below are the programs coverng biology careers but there are a variety of other “How do I Become” videos available on Linda Hall Library’s Vimeo page which discuss other STEM professions.

The Library produces a plethora of recorded lectures and interviews about diverse biology topics. Bring real-world research projects and international biology conversations to the forefront of the classroom through viewing sections or complete runs of these videos.

Ecosystem Restoration and Partnerships: Reintroduction of the Brown-headed Nuthatch to Missouri Pine Woodlands from Linda Hall Library on Vimeo.

​​​​​​​Hear from Missouri State Ornithologist, Sarah Kendrick, as she tells the story of how Missouri reintroduced the indigenous Brown-headed Nuthatch into their pine woodlands. In the early 1900s, Missouri’s logging practices pushed this nuthatch species to leave the state. They only returned through reintroduction in 2020 after a decade of concentrated forest restoration efforts to prepare the Mark Twain National Forest to support their population. Watch this video for an authentic example of ecological restoration and to highlight the importance of species abundance and diversity as an indicator of ecological health.

Listening in the Anthropocene: Humpback Whale Communication in a Changing Ocean from Linda Hall Library on Vimeo.

This lecture takes viewers into the depths of the ocean with acoustic ecologist, Dr. Michelle Fournet, as she shares her research on humpback whale song. Dr. Fournet explains how whale calls are studied, how humans can study the culture and lifestyle of whales based on their calls, and how human behavior is changing whale communication. Explore animal behavior, ecological change, and the importance of technology in biology research.

While the two videos linked above cover animal biology and ecological impact, this video takes the discussion down to the microscopic level with Dr. Bonnie Bassler, a Howard Hughes Medical Institute Investigator, and the Squibb Professor of Molecular Biology at Princeton University. Dr. Bassler walks the audience through her research into bacteria communication and behavior. Classes studying medicine or cell biology will find this video a fascinating look into how cells work together to multiply or take over host organisms. Start at the 5:30 minute mark to jump immediately to the main lecture.

Looking for a lecture or interview on a different biology topic? Check out the other videos available on Linda Hall Library’s Vimeo page.